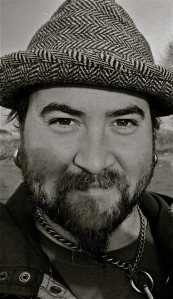 Tucker Teutsch 3.0 is cursed by an inability to ignore his dreams. His varied work as an installation artist, creative director, builder, event producer, logistician, craftsman, writer, and dairy farmer can hardly be described as a career path. If it is any path at all, it is a meandering one: guided by simple curiosity, physical explorations of the improbable, and gentlemen’s bets wagered, won, and (very rarely) lost within the elastic confines of his mind. He tends to work on a larger, more whimsical scale than most. Past examples of his creative work — a major commuter bridge transformed into an interactive work of art using fabric and light; a traveling temple constructed from everyday refuse; a Chinese Junk ship stage designed in California and built it in the dry, empty wilds of Australia — have existed at the visionary point of convergence between beauty, scale, and public interaction. Most of these works are evanescent, leaving few physical traces of themselves behind. Once the piece is complete and the curiosity exhausted, it goes away. Pictures and the recollected experience of individuals — thousands upon thousands of them — are all that remain. Lately, he has attempted to focus on the small things: the changing of the seasons, the excruciating daily pleasures of creating self-sufficiency, the bleats of a newborn goat. Tucker Teutsch 3.0 now lives on and runs a second-generation family farm in a hundred-acre wood located in the picturesque Rogue Valley of Southern Oregon. His life  — by modern metrics — is either an idyllic pastoral dreamscape or a 21st century anachronism. And yet, he is constantly distracted — for reasons of fun and financial necessity — by amazing projects and grand undertakings. This website, if nothing else, provides a quick look into the lasting products of a lifetime of creative passion. 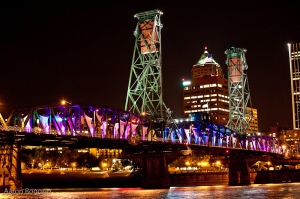 The centerpiece of the 2010 PDX Bridge Festival was the Hawthorne Bridge, which celebrated its hundredth anniversary. To celebrate the centennial of the nation’s oldest working vertical lift bridge, I designed an installation that turned the bridge into a kinetic art installation. A solar-powered fabric and lighting display, installed for the duration of the festival, made use of commuter interactivity to transform the Hawthorne Bridge into an illuminated map of how this bridge—the most widely used and loved of the six county-operated downtown bridges—is utilized on a daily basis. This, in turn, raised awareness of the role bridges play in bringing us together, both socially and geographically. Thus, as the thousands of people moved across the structure each night, they became part of a conversation about the role bridges play in our lives, turning mundane infrastructure into social commentary and a means for artistic expression. 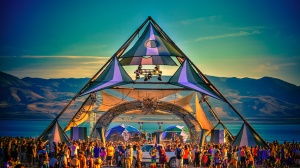 Commissioned by Burning Man as the central Temple for the event, this installation catered to an actively-involved crowd of over 50,000 people. As Project Director, Teutsch was responsible for all design, operational, construction, logistical, and budgetary oversight of the project. This included contracting with engineers, architects, material suppliers, and outside artists to successfully complete the large-scale installation. Awarded a $40,000 art grant, his efforts led to an additional $70,000 in funding for the project. Directing a crew of 200 onsite volunteer builders and artists, the exhibition of Basura Sagrada generated worldwide coverage on the BBC, Current.tv, Japanese television, and many national news outlets. That commission, as well as his 2007 project, Tasseograph: Trash Tea Temple, was a collaboration with the artist Shrine.

“They tell us that we will be entering a war zone. Those are the words they use: a war zone. They employ terms like battle fatigue, tours of duty, campaign and revolution. They inform us, in quiet tones, that a fight is being waged in New Orleans for the right of return of its poor, mostly black citizens: one house, one street, one neighborhood at a time slowly following the next into a long and arduous struggle towards rehabilitation and livability. It will take forever, and if it is ever finished, it will be a miracle. We know we are not miracle workers, only volunteers — kids really. Three months earlier we sat with the rest of the country, tears welling while destruction porn looped on television around the clock and the abandoned masses waved at us from the screen. We knew something had to be done; never in our dreams thinking that it might be done by us.” New Orleans post-Katrina collaboration with photographer Bill Daniel Click here to read the full article. ARTL!ES: Issue 49 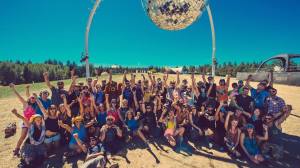 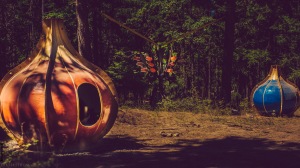 Part dadaist installation, part public event, part political activism, Brunch on the Bridge was an open-air food experience in an extremely nontraditional location. Overnight, my team transformed the center lanes of the Portland’s Hawthorne Bridge into a grassy park fit for a picnic of thousands, bringing the 2010 and 2011 PDX Bridge Festivals to a close on a playful and slightly surreal note.

Lucky participants had the chance to experience the Hawthorne Bridge and delicious food in a whimsical and fantastic environment, packing in their own picnic lunches or sampling from some of Portland s tastiest eateries. And yes, we had croquet and costumed performers! But it wasn’t all fun and games: The event strengthened the bond between our urban and rural communities through direct messaging about the food we eat, while at the same time addressing issues of hunger in our community.

Through the event, we contributed over a ton and a half of canned food items to Fish Emergency Services through this event, and donated some 30,000 square feet of usable sod to community organizations, churches, and individuals. Check out the timelapse video for a better understanding of the amazing logistics behind this incredible event.

Portland’s popular (and controversial) monthly arts event draws crowds of 15,000 patrons to the colorful Alberta neighborhood, along with 500+ vendors, dozens of street performers, a handful of angry neighborhood groups, and seven city agencies. Chaotic, to say the least! In 2011, the event was at a crossroads, and the choice was clear: Grow Up or Shut Down. With many vested interests on both sides of the argument, the City was faced with growing bills from an un-permitted (albeit wildly popular) event, irascible citizen groups bent on a purely DIY approach, and influential but divided neighborhood groups attempting to leverage divergent outcomes.

And so they hired me to help. In Spring of 2011, in anticipation of another uproarious summer season, I was contracted by the Portland Mayor’s Office of Arts and Culture to manage communications between 7 city and county agencies and multiple citizen groups to develop positive change and better organization of the event. I was tasked with directing all onsite logistics and movements of contracted security, site services, and traffic control — including the establishment of a 15-block street closure! During the season and at the end of the summer, I reported to the Mayor and his team with recommendations for how to improve the overall event with an emphasis on improving neighborhood relations, streamlining production, and lessening impacts on the City budget. My recommendations were handed over in a 40-page report and Production Book outlining every detail of the event, best practices, and bottom line recommendations for keeping the event alive.

It worked. A year later, the event finally had a permit and ownership of the event was transferred from the City to the Community. And while Last Thursday’s viability was and is still dependent upon so many stakeholders, I like to think that my time working with the event helped make a lasting difference. 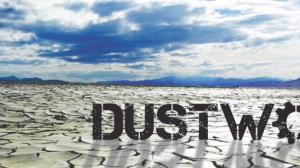 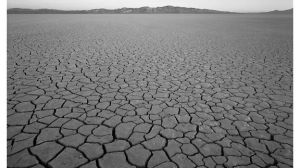 Instantly recognizable the world over, the Chinese junk boat has been used since the 3rd Century to ferry cargo and passengers throughout China, India, and Southeast Asia. Its design is still unsurpassed for ease of navigation on the open seas. And just as the junk boat has influenced maritime culture the world over for almost two millennia, it is our hope that Hong Kong Junk act as a vessel for authentic festival culture around the world.

Part shipwreck. Part dance party. All love. Commissioned by Symbiosis Events for the Eclipse 2012 festival in Far North Queensland, Australia, “Hong Kong Junk” was created by LOWBAR — an ad hoc team of crack builders, designers, knot tiers, machine operators, diggers, nutters, and fixits from Oregon, California and Hawaii. As project lead, I came up with the overall concept and crew, handled inter-ocean shipping and materials sourcing from three separate continents, and much more. By far the smartest move I made was teaming up with my old friend Brent Anderson to complete the laborious design and build phase. By design an art installation which functions as a fully-enclosed stage, Hong Kong Junk combines the visually arresting elements of a traditional Chinese junk boat with advanced techniques of computer-assisted fabrication to create a dramatic yet consistent themed zone for musical enjoyment or shaded relaxation.

“Highway 50 is all mine,” I tell myself, flooring the accelerator. “I own this road.” There’s no one around to prove me wrong. Venturing out into its great desolation like an explorer searching for a new route west, I’m adrift in the ephemera of a heavy road trip: Maps and spent coffee cups are piled around me as I trace the old Pony Express Trail across the Great Basin toward the Sierra Nevada. The unbroken sky and the rolling flux of mountain range and alluvial plain have a way of reworking one’s perspective. Out here, the world dissipates like a mirage on the hot tarmac, leaving only the open highway and the promise of discovery.
Musings on Nevada’s Highway 50
Click here to read the article.
Outside Magazine: July 2003 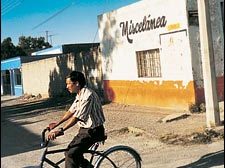 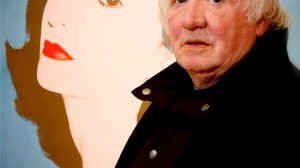